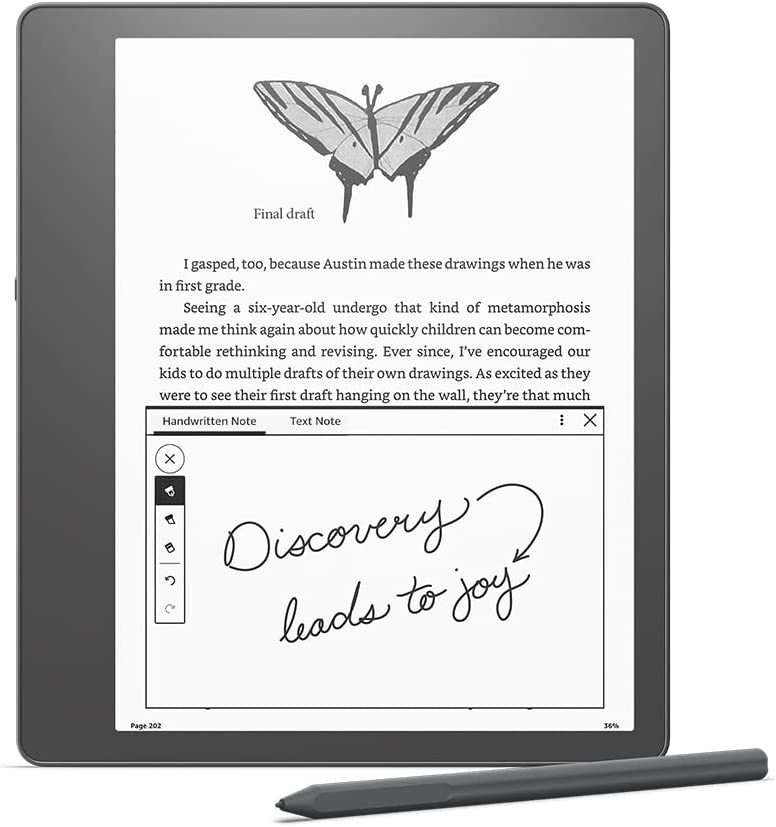 The end of the year is always a fun time for me to reflect on many things and look forward to what’s coming. 2022 is even more special because it’s the year I left web development to focus on podcasting full-time.

As part of that, I like to review my favorite tech and media from the past year. I’ve been doing it for 14 years! The only change this year: I’m no longer labeling the tech and media section. It used to be only tech, then half and half. Now it’s mostly non-tech.

Let’s get into it.

I’ve started tracking my favorites throughout the year so I don’t fall victim to the recency effect. Despite that, the Kindle Scribe is my favorite gadget. I wrote up my thoughts a few weeks ago and still love it. It’s my go-to device for reading and notes now.

I event spent too much time trying to reliably get my RSS feeds on it. I’ve abandoned that.

What made this category even harder was a lot of great tech came out this year. So here are a few of my honorable mentions:

It was a great (and expensive) year!

Launchers, or Spotlight replacements, were all the rage in the mid-2000s, and I thought it was settled science for me: Alfred has been my go-to since the moment I discovered it.

Raycast is 2022’s take on the Mac launcher, and it’s fantastic. It looks modern, has lots of extensions, and plenty of keyboard shortcuts.

The killer feature for me is the ability to search their “store” right from within the app — something you can’t do with Alfred. Installing and configuring extensions it a lot easier with Raycast, and that’s ultimately what sold me.

I know it didn’t come out this year, but I’ve been using Highball, a cocktail app, a lot lately as I’ve been experimenting with more mixed drinks. It’s so well designed and serves as a great log for my experiments.

There’s also Marvel SNAP, a game I’ve been obsessed with since learning about it. It’s a turn-based card game and super fun. I describe it as an easier (faster) version of Magic the Gathering.

Finally, Reader by Readwise just entered public beta and look super promising. There are a lot of things I love about it. I posted my initial thoughts here.

This used to be “Thing I Learned,” but it was always too nebulous and uncertain. So I’ve decided to make it my “favorite thing I did to enrich myself.” Still workshopping the name.

The winner of this is Brand Deal Wizard, a cohort-based course by Justin Moore. It’s a 4-week program, and I had doubled the $3,000 investment before the end of the program.

It’s super valuable, whether you have never gotten a sponsor/brand deal, or (like me), most of your money comes from them.

Other Things I Learned

I’d be remiss if I didn’t mention CaboPress. It’s something I feel like I mention every year but 2022 was legit the best one. I always feel energized after, and this year I decided to make a huge change based on conversations I had there.

And as I mentioned before, I’m experimenting with more cocktails. It’s a fun hobby and I’m learning a lot.

I recognize this book might not be for everyone, but I like to capture a lot of ideas, and I feel like I do nothing with most of them. Cue Building a Second Brain. From my Goodreads review:

While I love capturing notes and have several ways to jot down (or dictate) ideas, this book has already had a profound impact on how I organize them. The PARA system is perfect for how I work, and my notes app, Craft, lends itself very well to linking notes among different areas.

I managed to hit my Goodreads reading goal of 22 books, and liked most of what I read. I also consumed marginally more fiction. My favorite fiction book was Artemis1.

Brotherhood, a book about Obi-Wan and Anakin, also came out. But I can’t always make Star Wars stuff my favorite, right?

Look. I know I picked two here, but my list my rules, right?

Let’s start with HotD. I was worried about this show because, well, we all know what happened to Game of Thrones. But I was hopeful because Bennioff and Weis weren’t involved at all. Then I learned that the book is basically hearsay history and the TV would be the canonical story, which is a super cool concept.

Suffice to say, it made for a great show and I cannot wait until Season 2 comes out.

Now…onto Obi-Wan Kenobi. From what I understand, Andor was better. I still need to watch that2. But Obi-Wan is my favorite character. Ewan McGregor is a gem. And I can’t get enough post-Revenge of the Sith stories.

I thought it was fantastic, and the final episode was very, very satisfying.

I don’t watch that much TV3, so no honorable mentions here.

Music: Coheed and Cambria Vaxis 2: A Window into the Waking Mind

There was no contest here. Coheed’s new album came out in June and I listened to it every day starting in July through October. It’s so, so, so good.

I love that all of their albums are concept albums, so along with actually enjoying the songs, I like to try and figure out what’s happening4.

If you haven’t listened to it, I strongly recommend you do. I was obsessed, and Apple Music Replay proves it.

Runners-up include Doctor Strange and the Multiverse of Madness, the only other theatrical release I saw this year.

This absolutely bananas podcast by Wondery isn’t new, but it’s completely fascinating. It dramatically retells the story of every election in US history, providing historical context and the events leading up to the election.

It’s a really incredible look at what was most likely the American mindset during these crucial moments in US history.

It also taught me that at one point in history, nearly every president was shot or almost shot.

Great year for tech and TV. I still didn’t get to a movie theater. Maybe in 2023?