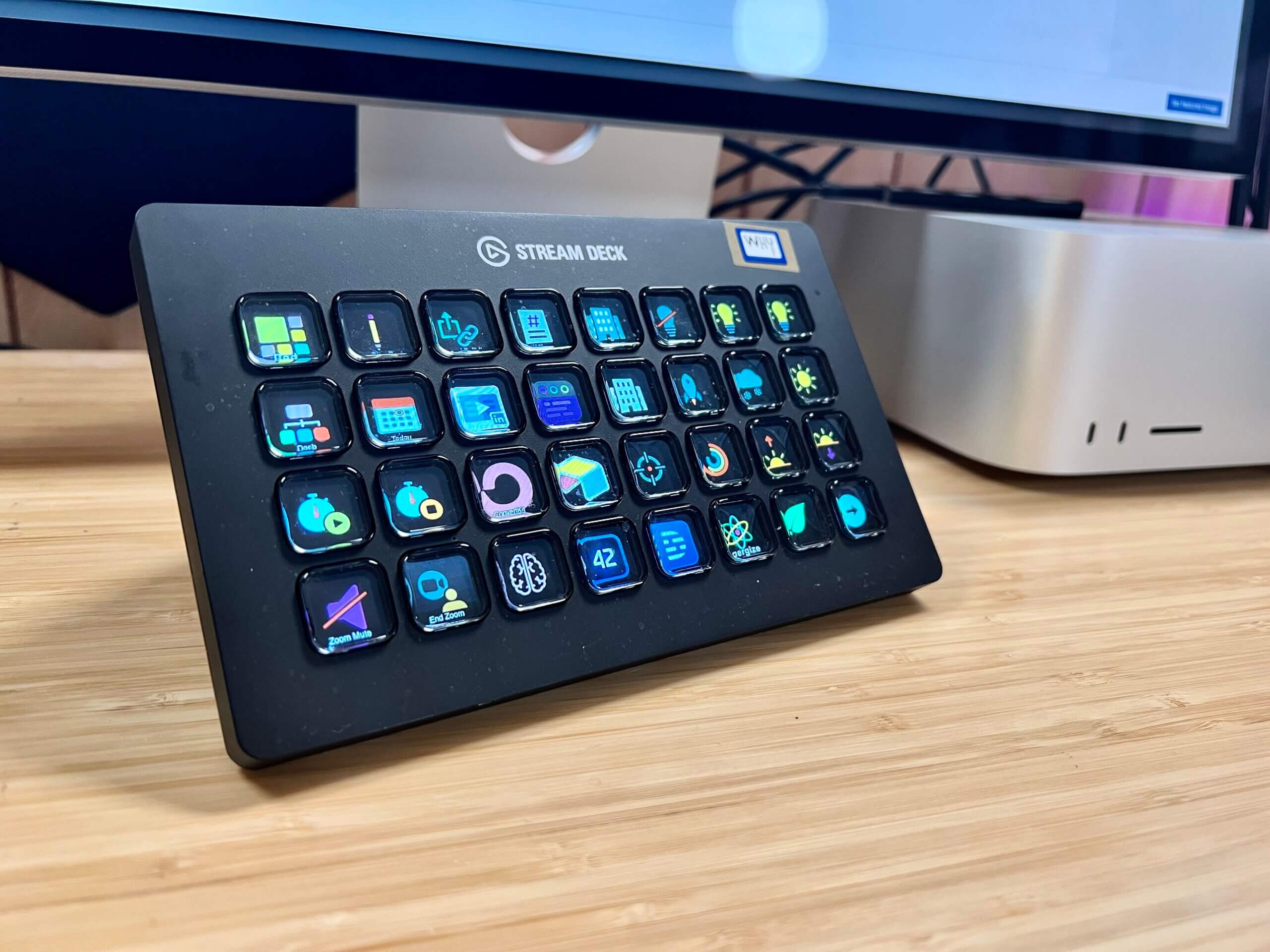 Perhaps the best device I’ve purchased in the last couple of years is my 32-Key Elgato Stream Deck. It’s a streamlined way for me to manage live streams, devices, and automation. I absolutely love it. When I first got it, I shared a photo on Twitter, fully configured. A lot has changed since then…including upgrading from the 15- to the 32-key. Here’s a breakdown of how I’ve set it up – everything from what it’s connected to, to where I got the icons.

What is Stream Deck?

First up, what is the Stream Deck? It’s a hardware device with programmable buttons that you connect to your computer. It connects to services like OBS, eCamm Live, YouTube, Twitch, Phillips Hue, Apple Shortcuts, and much more!

A lot of streamers (myself included) use it to manage streams and their environments during a live stream – it’s like a mini control room that only needs one person to manage!

Tip: It also makes editing YouTube videos a lot easier. Adding lower thirds, URLs, and transitions with the push of a button sure beats doing it in post-production.

Why Not Just Use Keyboard Shortcuts?

But you can’t put custom graphics on keyboard shortcuts, and the truth is that the Stream Deck makes it way easier to remember certain actions. Plus, Stream Deck makes certain integrations, like with Phillips Hue, easier. The same thing goes with eCamm Live.

I originally got the 15-key Stream Deck to switch between OBS scenes for my online courses. I wanted to easily move between talking head shots and slides without a ton of editing.

But I quickly discovered how powerful it can be, especially since it supports Keyboard Maestro, a Mac app for you to create your own advanced keyboard shortcuts and automated actions.

While I don’t think I need the Stream Deck XL presently, I am grateful there is a folder and profile support!

Edit: I totally caved and got the Stream Deck XL because I use it for a lot of stuff now. I’ve even spilled over into 2 pages!

Here’s what page 1 of my Stream Deck looks like:

Since the Stream Deck is for more than just streaming, I’ve set up page one mostly to run automations and lighting in my office. Here are a bunch of common tasks, mostly driven by the Shortcuts plugin for Stream Deck (now that Shortcuts has come to macOS). Here’s the breakdown by Row and Column (marked R# for Row number, and C# for Column number):

R1C1: A Keyboard Maestro shortcut. This one sets up my podcast workspace. It launches Garageband, Riverside.fm in Chrome, and Notion in Safari then positions the windows. So good, though I may change this to be driven by Moom in the future. Then this will turn into a keyboard shortcut!

R1C2: New blog post shortcut. It brings up a dialog box for me to put in a title and quick thoughts, then creates a new note in my “Writing” space in Craft.

R1C3: Opens the How I Built It Airtable base.

R1C5: Run my “Turn on the office” shortcut. It turns on and sets all of the smart lights.

I know have 2 Key Lights, a Key Light Air, and a Key Light Mini. Lower and increase brightness are stepped by a certain percentage (for me, it’s 10%) each press.

R2C1: Open my Dashboard note in Craft. Pretty much all of my important and timely information is here. It’s a fast way for me to save links, make notes, and organize Craft.

R2C4: Open Tot, a simple app for quickly capturing text. I pretty much use this as a scratch pad, or a way to transfer info between devices since it syncs. I don’t have to think about where it goes until later.

R2C5: Runs my “Turn off the office” shortcut

R3C1: Start a Timery Timer. This will allow me to choose a project and add notes, then start a timer, in Timery (a much nicer app that works on top of Toggl).

R3C5: Open FindMy. I was mostly just playing around with this when Shortcuts first rolled out for Stream Deck, but I tend to open the app a lot, to find stuff or people.

R3C8: Half Brightness for Hue Lights

R4C1: Mute Zoom. Much faster than pressing the in-app button, or the keyboard shortcut IMO

R4C2: End current Zoom meeting. This will end, and confirm, all with one press.

R4C3: Run “I have an idea” shortcut. This will open a dialog box then append the text to my “Ideas” note in Craft

R4C4: Open PCalc. I use this a lot, but I actually have a more convenient keyboard shortcut above the number pad, so I’ll likely change this.

R4C5: Open Descript. Something super frustrating about Descript is that it doesn’t have a dock icon, so this button allows me to quickly open it.

R4C6: Energize Scene. This sets all of my Hue Lights to white

R4C7: Aurora scene. This sets my Hue Lights to a teal/blue-green color.

This page is a lot more up in the air as I try to figure out the best, easiest scenes to manage, and how my Stream Deck Pedal fits into it all.

For now, let’s take it row-by-row. Most of columns 6 and 7 are blank and TBD. They’ll be skipped

I use eCamm Live for all of my streaming needs now. It’s robust, works super well, and I’ve got several custom scenes and overlays. Here’s the breakdown by Column (marked R1 for Row 1, and C# for Column number):

R1C1: A scene that is just my camera. Denoted by a person icon and labeled “Me.”

R1C2: A scene that is just my computer’s screen. Denoted by a laptop icon and labeled “Screen.”

R1C3: The intro image for my live stream

R1C5: Bring in a guest to the left of me

R1C8: Go Live in eCamm Live (this changes based on what I have it set to in the app)

R2C1: Face Cam view. I use the Elgato Face Cam as an overhead camera, usually when I’m sketching or demoing some other real-world thing. The camera sits on a tripod and can be moved easily.

R2C2: Overlay a big version of my main camera to whatever scene is active. Usually, this gives me a nice border around some graphics, but I’ll likely replace this in the near future.

R2C3: Overlay a small version of my main camera in the bottom left (or right) corner. This is especially helpful when I want to show my face during a demo or talk. It’s small enough to not obstruct whatever’s on the screen.

R2C4: Last Comment. This allows me to easily overlay the last comment made during a live stream.

R2C5: Hide Comment. The comment will disappear after 20 seconds. This button lets me rush it if I want.

R2C8: Run the “I’m Recording” shortcut. This will turn my recording light upstairs red, start a timer, and put my computer in my Recording focus mode so no notifications get through.

R3C1: iPhone Camera. I will usually use this as a secondary view of myself, or switch to it if my a6400 gets hot, which doesn’t happen too often.

R3C2: iPad Camera. For drawing and such!

R3C4: “Live Demo” mode tells eCamm Live not to hide any of its overlays, so when I want to show someone how to use eCamm Live, I press this button.

R3C5: “Turn on Christmas.” This would add a tree and lights to the stream. I really need to update this page.

R3C8: Run the “I’m done recording” shortcut. Stops the timer, sets my recording light to white and turns off my focus mode.

R4C8: Number of viewers for the current live stream

So there you have it! That’s everything on the current (April 2022) iteration of my Stream Deck. The configuration goes through some minor changes over time, but now that Shortcuts is on the Mac, I will probably continue to tweak! Speaking of…

Aside from the Stream Deck and accompanying software (which supports a lot of stuff out of the box), there are a few plugins and graphics I’m using.

I’m using 4 plugins to help me automate. All of them can be found in the Stream Deck Shop plugins area:

For the icons, I’m using the Shortcuts Icons set by MacStories Pixel. These are designed really well, there are a ton, and it gives the Stream Deck a consistent look across each button.

They were originally designed for use with iOS Shortcuts, which I also use them for. But since they are standard images I can use them for the Stream Deck as well.

A few weeks ago I got the Stream Deck Pedal. It has 3 buttons:

Using this for my videos will be a lot easier for bringing up overlays or change the scenes because I won’t have to move at all, as far as the camera can see.

With this, I’ll likely update my deck even further to remove scenes and move the 3 crucial live stream actions (whatever they happen to be) to the pedeal.

I generally reserve a spot in posts like this for ways I want to improve my experience. I have a few thoughts. Now that I’ve picked up a Stream Deck XL, I want to make the most of it:

Tell Me What You Want to See!

Do you have a Stream Deck? Want to see what’s possible? Let me know in the comments!